Its history, its stories, and my spending two nights there
(a long article, so grab a pot of coffee) 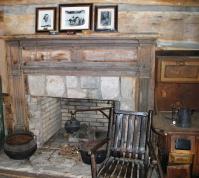 On the grounds of the Bell School building and city park in Adams, Tennessee, a tiny and rustic house sits quietly, paying homage to a bygone era. For over two hundred years, her now rusty nails and withered logs have stood witness to the triumphs and tragedies of those who came before us. Some even say she holds secrets; if only those logs could talk.

Known as the “Bell log cabin,” the aging two-story house is named after the John Bell family, who moved to the area in 1804 and settled nearby. The cabin and park occupy a tiny portion of what was once John and Lucy Bell’s massive farm, where their family allegedly endured a four-year reign of terror at the hands of a malevolent entity known as the “Bell Witch.”

Originally, the cabin sat near the farm’s northern border and atop Brown’s Ford Bluff on the Red River. It was moved to Adams’ city park in the early 1980s when George and Theo Dickinson donated it to the Tennessee-Kentucky Threshermen’s Association, the organization that puts on a yearly antique tractor and farming show in Adams.

In a 1990s historical and architectural review, the Tennessee Historical Commission learned that the cabin was built in the 1810-1824 timeframe and was likely used as a tenant house, or slave quarters. The study also revealed that the upstairs area and chimney extension were added in the mid to late 1850s, and that their materials likely came from other structures that had been dismantled (ironically, the Bell family’s homestead, aka the “Bell Witch house,” was dismantled in 1853). After John Bell’s death in 1820, the cabin’s ownership passed to his wife, Lucy, and upon her death in 1837, it passed to a son, Richard Williams Bell.

Early accounts of the Bell Witch legend state that Richard Bell wrote his personal eyewitness account, a manuscript entitled “Our Family Trouble,” in 1846. Assuming that was the case (no original document has ever been submitted to prove he even wrote such a manuscript), and given the date he inherited the cabin, it is possible that he wrote “Our Family Trouble” while living there.

Richard sold the cabin to his younger brother, Joel Egbert Bell, in the 1853-1855 timeframe. One account states that while Dr. Henry Sugg was tending to a sick child at Joel’s house (i.e., the cabin) around 1855, his instruments suddenly flew out of his bag, and a feeble whisper was heard throughout the cabin a short time later. About ten years later, Leftrick Reynolds Powell, son of Betsy Bell and Professor Richard Powell, stayed in his uncle Joel’s cabin for several weeks while recovering from a Civil War battle wound. One night, a friend came to spend the night with Powell, and the two later reported hearing strange voices and watching the front door open by itself.

After Joel Egbert Bell’s death in 1890, the land and cabin came into the possession of farmer Levi Smith and remained in his family until George and Theo Dickinson acquired it.

In the summer of 2001, with permission from Mayor Brooksher and the Town Council, I brought an East Tennessee newspaper reporter, my book’s artist, and my musical friend Bob Welch (of Fleetwood Mac fame) and his wife, Wendy, to the cabin for an all-night chit-chat and paranormal investigation. We experienced strange, rat-like noises inside and outside of the cabin, a couple strange dogs that seemingly came out of nowhere and walked through the front door, and some giant moving shadows that were cast upon the silky fog that blanketed a nearby field.

Bob, who had driven up to the cabin in a vintage, mint condition early-1970’s Cadillac, is sadly now deceased. He and Wendy were huge fans of the paranormal, the Bell Witch, and UFOs. They loved their Bell cabin experience. We also spent probably an hour, at my insistence, discussing the spiritual and philosophical influences behind the song, “Oh, well.” And yes, the song is much deeper than what most people realize.

I made a return trip to the Bell log cabin in the fall of 2002. I was given full use of the place that night in exchange for a lecture I had given at the Threshermen’s Show earlier in the year. This was another all-nighter, and not only with friends, but also several people from the general public who later became my friends.

One friend who came from out of state was an executive producer for MTV’s old paranormal show, “Fear,” and she conducted automatic writing sessions all night long; the results were chilling to say the least. At one point, she began writing erratically the words “Robert,” “water,” and “choke.” I researched her revelation the following week and learned that a tenant farming family who lived in the cabin back in the 1960s had a son named Robert, who drowned nearby. Aside from the automatic writing sessions, the action in the cabin was much like what I had experienced during the previous year’s investigation, well, except for one very bizarre incident.

A slender, bearded college student pulled up in a late 60s model VW “Bug” about thirty minutes before sundown. Carrying a huge snack bag over his right shoulder, he politely made his way into the cabin, scribbled a name on my sign-in sheet, kicked back in an old rocking chair, and soon fell into a deep sleep. He had yet to say anything to anyone. He slept, and slept, and slept. Finally, about 3:30 the next morning, he suddenly awoke and sprang from his chair, let out a ferocious, blood-thirsty scream that sounded like a sick whale on steroids (and oddly, the first utterance we had heard from him all night), and ran out the cabin’s back door and onto the porch.

He glanced down and noticed me sitting to his left, then he proceeded to vomit ALL OVER me (and the pair of shoes I had removed earlier). He quickly turned around, darted back through the cabin, out the front door, and made a beeline for his now dew-covered VW. He did not even stop to get his snack bag.

Less than a minute later, all we could hear was a “Bug” speeding out Highway 41 and off into the distance. None of us knew who he was, nor did any of us ever hear from him again. Many said he appeared “possessed.” I suggested he might have been visiting from the 1960s via a time warp. His snacks made for a pretty good breakfast later that morning.

That’s what happened the two times I spent the night in the Bell log cabin. Is it haunted? That’s hard to say. Because of its reputation of having stood witness to the actual Bell Witch disturbances 200 years ago, and the eerie, surreal energy that looms over Adams, emotions can run high, sensations become intense, and the mind can go in many directions at once. Think about that for a while. I did.

And now, 16 years later, I still find it interesting that the name the “hippy” 60s VW boy wrote on my sign-in sheet—and only a first name—was “Robert.” Oh, well.